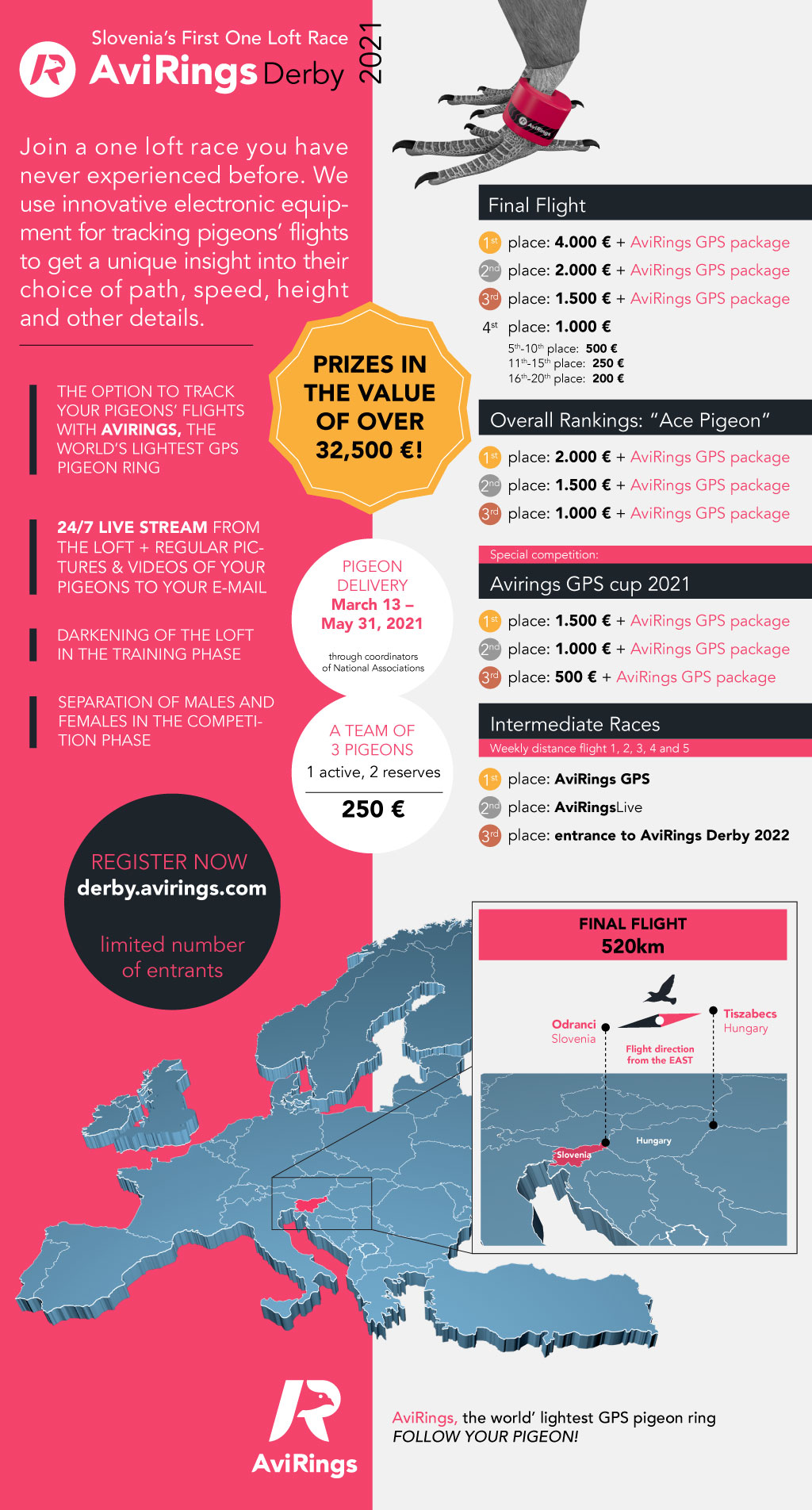 AviRings Derby is a unique one loft race with young pigeons, characterized by the use of state-of-the-art electronic equipment for pigeon racing. Our innovative technical approach will provide participants of the AviRings Derby with current and transparent information about their pigeons. AviRings Derby is different from other races especially because:

Participation in the competitions of the “AviRings Derby 2021” requires a correct and complete registration in advance.

Each team consists of three (3) pigeons; the first-listed is active in races, the second- and third-listed are first and second reserves. Registration fee for each team is set at 250 €.

Prizes can be won only by activated pigeons.

End of registration can be announced when loft capacities are reached. Registrations can be sent to the AviRings Derby Club:

Registration fee for the AviRings Derby can be paid by bank transfer. The necessary bank details can be found in the chart below:

Payment confirmation should be sent directly to AviRings Derby (derby@avirings.com) or through your coordinator.

Delivery of registered and paid pigeons is must be made from 13/3/2021 to 31/5/2021. When the pigeons are delivered, they become property of the AviRings Derby Club. Delivery can be conducted in person, using animal transport or through collection location in each country on specific dates. Delivered pigeons must come with an ownership card and a correctly completed pedigree. Pedigrees will be published on the website just before the final flight.

Pigeons can be delivered only if they are at least 28 days old and have been vaccinated against paramyxovirus before delivery.

If an active pigeon is lost and doesn’t return in two days, they are replaced by the next available reserve pigeon. If the lost pigeon returns at a later time, they will get the status of a reserve.

Reserve pigeon can be activated at any time by paying the fee in the amount of 50€.

Reserve pigeons that were activated for the final flight by a third person can receive prizes and medals from the prize fund; but the share of the sales of that pigeon at the auction is still available to the person who registered the pigeon in the first place.

All participants at the AviRings Derby will experience usage of the AviRings GPS ring, as the team registration includes the rent to use the GPS ring on the first registered pigeon in all five AviRings races as also in finale flight. In case this pigeon doesn’t return in the loft, the GPS ring get his first replacement in the team.

Participants can also lease a GPS ring for other activated pigeon (already activated reserve pigeons). The costs of the rent for alle AviRings races and final flight are 100 € per pigeon. In case this pigeon gets lost, rent will not be refunded.

Activated pigeons that have been used GPS ring at least on three AviRings races or final flight will participate in the "AviRings GPS – CUP 2021" competition.

In the period between acclimatization and the final flight (11/9/2021), pigeons will have training and intermediate distance flights (AviRings races) according to the planned schedule below:

The organizer explicitly reserves the right to change the schedule of trainings and races. If required, additional trainings can be organized. Trainings that are not carried out are usually not replaced. AviRings Races and of course also the final flight are carried out at a later time if they can’t be realized on their planed dates (due to weather conditions etc.). Overall ranking (for example the Ace Pigeon competition) is based only on races that have been realized.

All pigeons that have been activated before a specific AviRings Race can compete for the prizes. Pigeons that haven’t been paid for (reserve pigeons) are not eligible to win prizes.

The purpose of the “AviRings GPS CUP 2021” is to find highly-motivated pigeons with thebest sense of orientation, meaning pigeons that fly as close as possible to the ideal line.Naturally, their speed of flight is also considered in addition to their sense of orientation.Participants will have the opportunity to rent GPS rings for pigeons on their teams to be usedon individual trainings, AviRings Races and the final flight.

All activated pigeons that have rented GPS rings on at least two (2) AviRings Races and thefinal flight will participate in the “AviRings GPS CUP 2021”.

The data gained from the GPS ring will be used in each AviRings Race to create two (2) additional ranking lists with competing pigeons:

Both ranking lists (both criteria) equally influence (50:50) the final ranking for the “AviRings GPS CUP 2021”. Only results from the best two (2) AviRings races and the result from thefinal flight are counted for the final ranking.

The final flight will be – if conditions permit – started from a distance of approx. 520km, offering a fair test for pigeons’ skills. The release of pigeons will be scheduled for the morning hours according to the organizer’s judgment.

The final flight of the AviRings Derby 2021 is planned for September 11. If final flight can’t be realized on September 11, 2021 due to certain conditions, it will be re-scheduled. Organizer will announce the new date in due time. Monetary and non-monetary rewards will be given for the final flight. The ranking is determined by the arrival time of pigeons. If more pigeons share the same time of arrival, they will also share the same rank. The prizes for such ranks will be shared equally in this case.

Prize pool as described above is valid in the case of 200 paying registered teams. In case of be fewer registered/paying teams, the prize money will be adjusted accordingly in per cents. In this case, the organizer will announce the changes in due time before the final flight. Monetary prizes will only be paid through a bank transfer.

All pigeons that will successfully finish the final flight will be put up for auction online. Auction proceeds will be shared between the organizer and the participant who originally registered the pigeon (50:50 share). Participants’ shares will be paid through bank transfers. The auction will be announced in due time through the website: https://derby.avirings.com.

If a pigeon gets lost in the loft surroundings, during trainings, AviRings Races or the final flight, the registration fee is not refunded. In this case it is not possible to register and deliver a replacement pigeon.

Organizer reserves the right to cancel all flights. If the final flight of the AirRings Derby 2021 is cancelled, paid fees, reduced by all organizer’s expenses, will be refunded. All the pigeons collected up to that point will be put up for auction online at https://derby.avirings.com. 50% of the auction proceeds will go to the participant and 50% to the organizer. If other flights are cancelled, no refunds of the registration fee will be given.

Pigeons will be registered for the races with an electronic system “AviRings Live”, created by the company AviRings d. o. o., Murska Sobota. Pigeons will also use AviRings GPS rings or GPS training rings on all flights.

A ranking list will be created for each Avirings Race. The race is finished when 33,5% of all released pigeons arrive back to the loft. The announced prize fund will be given out to 20th place regardless of this.

It is the responsibility of participants to equip registered and sent pigeons with a pedigree. AviRings Derby does not offer any guarantee that the information in pedigree documents is correct.

By registering participants accept all terms & conditions of this public announcement as binding. Legal proceedings are excluded.

We look forward to your participation.